Here is a preview of the film,  published one day before its release. Read the full article below. 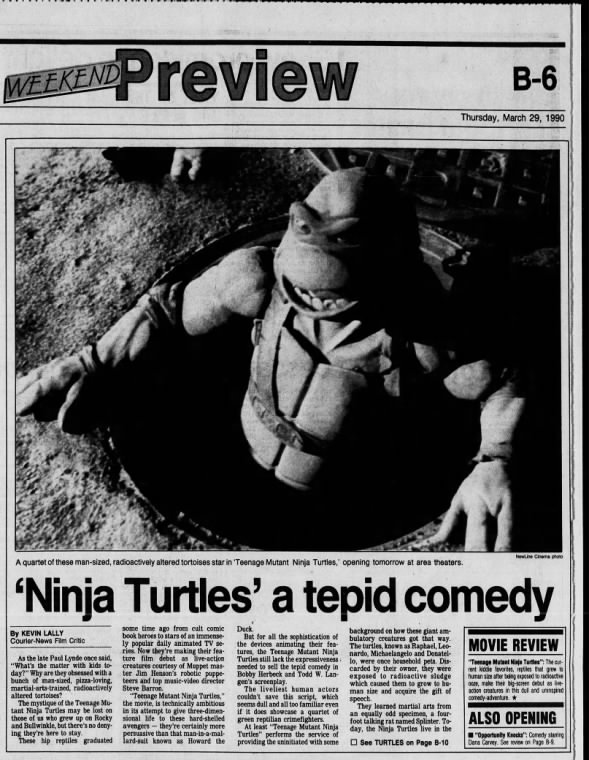 As the late Paul Lynde once said, “What’s the matter with kids today?” Why are they obsessed with a bunch of man-sized, pizza-loving, martial-arts-train«l, radioactively altered tortoises? The mystique of the Teenage Mutant Ninja Turtles may be lost on those of us who grew up on Rocky and Bullwinkle, but there’s no deny- ing they’re here to stay. Thee hip reptiles graduated some time ago from cult comic book heroes to stars of an immensely popular daily animated TV series. Now they’re making their feature film debut as live-action creatures courtesy of Muppet master Jim Henson’s robotic puppeteers and top music-video director Steve Barron. “Teenage Mutant Ninja Turtles, ” the movie, is technically ambitious in its attempt to give three-dimensional life to these hard-shelled avengers — they’re certainly more persuasive than that man-in-a-mal- lard-suit known as Howard the Duck. But for all the sophistication of the devices animating their features, the Teenage Mutant Ninja Turtles still lack the expressiveness needed to sell the tepid comedy in Bobby Herbeck and Todd W. Lan- gen’s screenplay. The liveliest human actors couldn’t save this script, which seems dull and all too familiar even if it does showcase a quartet of green reptilian crimefighters. At least “Teenage Mutant Ninja Turtles” performs the service of providing the uninitiated with some background on how these giant ambulatory creatures got that way. The turtles, known as Raphael, Leo- nardo, Michaelangelo and Donatello- 10, were once household pets. Discarded by their owner, they were exposed to radioactive sludge which caused them to grow to human size and acquire the gift of speech. They learned martial arts from an equally odd specimen, a four- foot talking rat named Splinter. Today, the Ninja Turtles live in the sewers of New York City, from which they periodically surface to foil crime, especially when it occurs in dark alleys. In their first movie, the mutant heroes do battle with an underground organization of young thieves known as The Foot, which takes its revenge by kidnapping their rodent mentor, Splinter. Along the way, the turtles are befriended by April O’Neil, a television investigative reporter, and Casey Jones, an arrogant, long-haired vigilante-/loner and martial arts master. The fact that the Teenage Mutant
Ninja Turtles’ core audience is children shouldn’t excuse the perfunctory plotting, which includes various wranglings between the Turtles and the Foot, and a hackneyed love-/hate relationship between April and Casey. The humor is of the lowest-common-denominator variety, peppered with lazy references to TV shows and other recent pop culture lore. The only comic notions that really work appear to be taken from the original: the Turtles’ obsession with pizza and their Valley Boy-style interplay. But on the whole, kids and their parents deserve something wittier.
The film is artfully designed by Roy Forge Smith, with North Carolina soundstages doubling for New York’s dingy back streets, but John Fenner’s dark-toned cinematography is too oppressive for a supposedly light family film. The martial-arts fight scenes are capably handled, if not exactly bracing, with the four actors who play the turtles maneuvering surprisingly well in their bulky-looking costumes. Human stars Judith Hoag and Elias Koteas (“Full Moon in Blue Water”) make a dimmer impression as April and Casey, respectively. “Teenage Mutant Ninja Turtles”
has a built-in audience, but one doubts they’ll be back for seconds of this murky turtle soup. Rated: PG (Some fight scenes may be too violent for the very young).

What is your Dbag Name?

A Night With The Living Dead Isn't Exactly Heaven on Earth