Thirty-five years ago today, on May 4th, 1984, Golan and Globus released a movie under their company Cannon Pictures. That movie was Breakin’. This is not a review of the film nor is it a discussion of why Jean-Claude Van Damme was an extra in this movie. What we have here is the beginning of a cultural youth revolution across rural America. With the release of films like Breakin’, Beat Street, Krush Groove and everyone’s favorite sequel Breakin’ 2: Electric Boogaloo kids from all over the country, including this one found themselves entranced by the popin’ and lockin’ dance moves that the films showcased. Breakdancing became the thing that was cool and everyone wanted to be able to do. Now, it did not matter where you were from, you could now become a Breakmaster on your very own (or so we thought). Breakdance culture had gone mainstream and it was everywhere. We found its influences in our moves, music, fashion and even in popular tv shows as they tried to latch on to the growing trend that had the kids in America obsessed with a new expressive art form.  I was no exception to this as a kid growing up. Once even entering in a Breakdance competition, even though the 7 year old me did not know how to Breakdance. FYI, when it comes to Breakdancing the term “Fake it till you make it” need not apply. My dreams of being the next Ozone were quickly dashed as I went into my first set of moves and my shoe flew off into the crowd that had gathered to watch what must of looked like a fat white kid apparently having a seizure to RUN DMC. We all attempted the dance moves we saw in the films, most of us failed, some of us got injured, but much like skateboarding, rollerblading, or even surfing, you get back up and try again…or until your shoe flies into the audience.

I hope this post helps jog loose some memories of your own. Here is a fantastic article I dug up from 1984 just as the dance craze phenomenon was hitting the mainstream and a playlist curated by DuDe himself of a few of his favorite tunes to bust a move to!

Breakdancers say their moves keep city youths out of trouble

Breakdancing — an art form that involves twisting tilting bodies spinning endlessly along a dancefloor and youths flipping in the street — does more than move its participants’ bodies. Other dances such as the twist The Hustle, The Jitterbug, and the tango also pushed many people out on the dancefloor. But to Fred F, Carter’s Free and Fast Breakdancers a professional breakdancing group out of Philadelphia. breakdancing is an institution, According to the members of Carter’s group. breakdancing gives an identity. It stops fights, vandalism and keeps youths out of trouble. “In the cities, a lot of kids had problems with getting

into gang war” Fred F. Carter, group president, said. ‘*The advantage of breakdancing is that it has almost eliminated the wars on the streets. The gangs. instead of who can fight the best. challenge each other through breakdancing and see who can dance the best,” he said.

His dancers, Rasheen Roberts, 24, Troy Crump. 16. James Davenport. 18, all of Philadelphia. and his son Carter Carter. 13. and John Pattie. 13. both of West Chester all said breakdancing has changed their lives. They have shown their moves in various forurns including the Fairlane Village Mall last month, at the Penthouse Disco in Adele. Canada. at the Advertising Club of

Metropolitan Washington, Washington. D.C., and on The Shelia Adams show on WJFB TV – Augusta. Ga. They also appeared on the June Stewart Show WLDW-TV. North Augusta, S.C., on Evening Imagine, shows in Pittsburgh and Philadelphia on morning show Philadelphia and on the Pittsburgh 2-1 Day show on KDKA-TV.

All breakdancing requires. they said, is music, which can be made with a “boombox” {Slang for a portable stereo radio-cassette deck They said many youths in Philadelphia grab a piece of

cardboard large enough to fit two or three people and “Breakin’ keeps people out of trouble, Troy said giving kids something they can do and do well. A lot of my friends stopped fighting and started dancing instead. “Kids who breakdance don’t have time to fight or get in trouble.” Troy added. “because they have to put so much time into dancing to become good at it-‘

“Breakdancing has given meaning to my world by giving me a way that I can express myself. Not everyone can do It like you do. You can make your own moves your own faces. You act as you dance,” Rasheen said. “You can’t drink or do drugs and breakdance, because you constantly have to know what you’re doing, Most breakdancers. if they were on drugs, got off them. “It gets you into yourself in forcing you to maintain our senses,” Rasheen said. “You keep your coordination and if you get good you can measure yourself with other

breakers. Breakdancing has steps all its own, the younger Carter said. A few basic breakdancing moves are • •Popping.” “Electro Boogie.” “King Tut,” and the “Moonwalk,” he

Check out the full article below from newspapers.com! 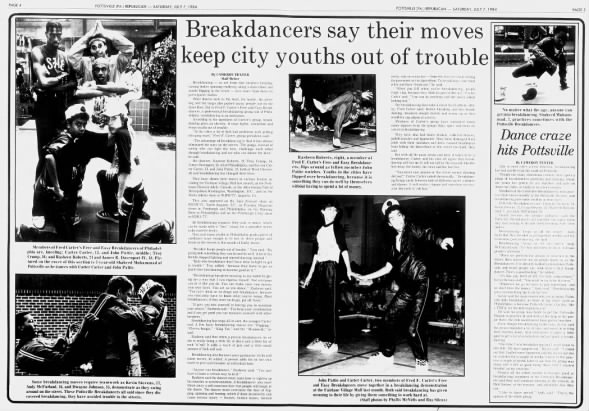 Here is a Spotify playlist of just a few of our favorite Breakdance tacks that had us all poppn’ n’ lockn’ in the 80s or at least trying to.

What is your Dbag Name?

A Night With The Living Dead Isn't Exactly Heaven on Earth