Girls, Girls, Girls is the fourth studio album by Mötley Crüe, released on May 15, 1987.

The album contains a more blues-riffed style than their previous albums. The record contains the hits “Wild Side” and “Girls, Girls, Girls.” The record also reflects the band’s hard-living lifestyle, and pays homage to their love of riding Harley-Davidson motorcycles, drinking whiskey, drug use, life on the Sunset Strip, and spending nights at strip clubs. However, there are darker sides to the album as well, notably “Dancing on Glass” and “Wild Side”. The power ballad “You’re All I Need” tells the story of the death of a lover, and the song “Nona” is a tribute to Nikki Sixx’ grandmother, who died during the recording of the album. 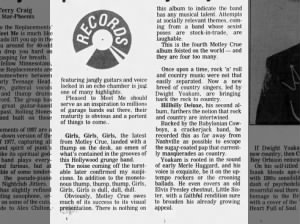 Here is a scathing review I found of the album from the Star-Phoenix Newspaper out of Saskatoon, Saskatchewan, Canada from May 28th 1987!

Girls, Girls. Girls, the latest from Motley Crue, landed with a thump on the desk, an omen of what’s contained in the grooves of this Hollywood grunge band. The noise coming off the turntable later confirmed my suspicions. In addition to the monotonous thump. thump, thump, Girls, Girls, Girls is dull, dull, dull. Obviously, Motley Crue owes such of its success to its visual presentation. There is nothing on this album to indicate the band has any musical talent. Attempts at socially relevant themes, coming from a band whose sexist poses are stock-in-trade, are laughable.

This is the fourth Motley Crue album foisted on the world — and they are four too many.

Sound of White Noise is the sixth studio album by American thrash metal band Anthrax, released in May 1993 on Elektra Records. It is the band’s first album to feature vocalist John Bush, who replaced longtime Anthrax vocalist Joey Belladonna in 1992.

Here is another not so stellar review! The Daily Sentinel out of Grand Junction, Colorado printed this on May 28th, 1993

In retrospect do you feel these reviews are fair and or hold up still? What do you think the better album is?

Amazing how the simple switch of singers can totally transform a band. By replacing the urban street attack of fired Joey Belladonna with the suburban operatics of former Armored Saint vocalist John Bush, the New York originated group goes from creative, if erratic, metal pioneer to predictable, if dynamic metal mainstreamer. This no longer sounds like the band that broke ground by collaborating with Public Enemy — though PE scratcher Terminator X does make a guest appearance on “1000 Points of Hate,” one of the album’s intense highlights and a welcome break from ponderous lyrics. There are other equally solid moments on the album, including hypnotic stunt guitar work on “Room for One More” and the dreamy, though not quite spooky enough “Twin Peaks” tribute of “Black Lodge” (inspired and orchestrated by “Peaks” musical director Angelo Bandelamenti). Burns’ overbearing vocal posturings, though, detract from the sharp music, without offering enough compensate. He’s just too much in the same Ian Gillian-David Coverdale-Ronnie Dio school as thousands of other metal singers The cool thing about Anthrax used -to be how it steadfastly stood apart from that crowd. 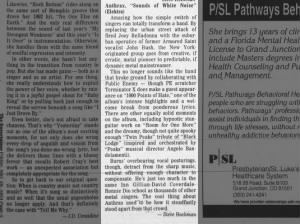