Let’s take a look at another not so stellar review from a classic film from the 80s! This time is the classic Beetlejuice! Forget how many times you have seen this and how much we all love this film. Based on this review would you have gone to see this or would it of been in Rental territory?

If the makers of “Beetlejuice” had spent half as much effort on a decent script as on the film’s wondrous special effects and sophisticated set design, they might have turned out one of the better fantasies of recent years. Instead, we’ve got an interesting failure, a mild “Topper” variation with a nod to ”Ghostbusters.” Tim Burton, the former animator who directed “Pee-wee’s Big Adventure,” imparts great style, if little clarity, to the unnecessarily ‘ confusing story of the Maitlands, a young couple who are killed when their car crashes through the side of a covered bridge in the picturesque New England village where they lived. “This can’t be heaven,” says Barbara (Geena Davis) when they turn up in a waiting room where dead folks take bakery-style numbers for an appointment with a world-weary caseworker (Sylvia “In heaven there Sidney) wouldn’t be dust.” “Barb, we’re dead,” replies patient spouse Adam (Alec Baldwin). “I don’t think we have much to worry about anymore.” Not true. Not only are the Maitlands confined to their Colonial style home for the next 125 years — for some reason, gigantic lizard-like monsters lurk outside the doors and windows — but they have to share it with Charles Deetz (Jeffrey Jones), a Manhattan real estate developer, along with his bizarre wife, a stranger daughter, and a live-in interior decorator bent on transforming their formerly comfy house into a riot of leather, steel, and patterned mauve wallpaper.

Read the full article below! 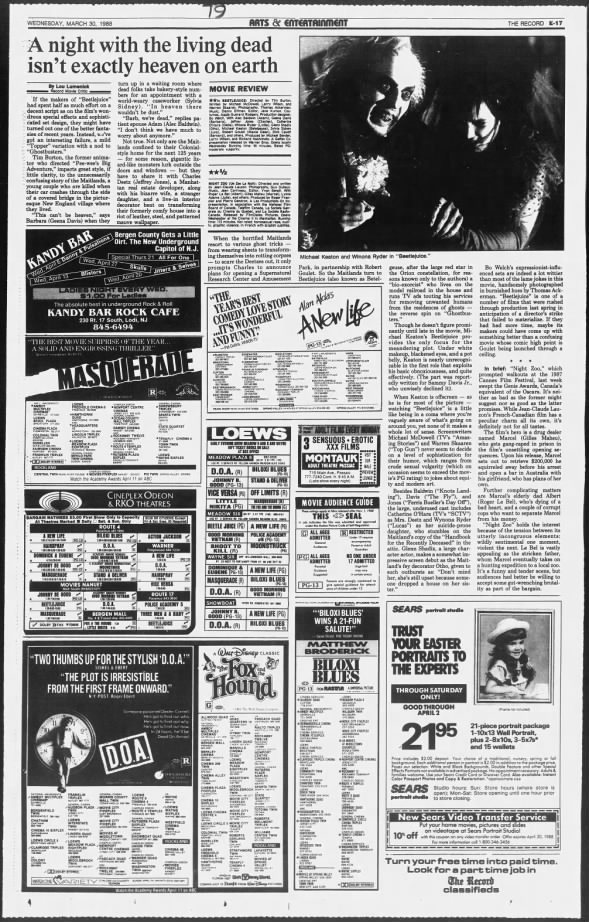 TMNT The Movie: 29 Years Ago Today

What is your Dbag Name?
Scroll to top